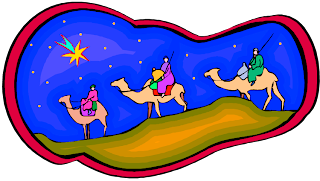 Sometimes, the light at the end of the tunnel is not an oncoming train;

sometimes it is a serene star, an impossibly pure beam from the eye of God.

Sometimes, the congregational clatter and chatter is not a clearing-out sale of stocking stuffers;

sometimes it is a choir of angels, singing a distant harmony of the heavens.

Sometimes, the mud thwacked against your windshield is not from that speeding truck;

sometimes it is the fling and pitch from three sets of grinding camels' feet in flight following that star.

Sometimes, the smell of wet mittens and breath soaked scarves confuse your senses;

sometimes it is the rich scent of earth, rain drenched sheep, and lanolin-saturated shepherd's hands.

In this time of the bending of Christmas to our image,

In this Season of Strategized Obsolescence,

In this honoring of Holiday, homage to the credit line, and trust in 9-1-1,    mobile phones and car alarms,

It is good to know that--

Sometimes, the crunch underfoot is a straw fallen from a donkey's manger,

Sometimes, the waft and whir of pigeon wings is deceptively angelic,

Sometimes, that trail of mud leads to the Stable.

In this time of Advent, of preparation, of reflecting and announcing in equal measure,

In this time of sorting through Sacrament, Signs of the Times, and silence from the heavens,

In this time of stark reverie and horror at a world conflagrant with greed,

It is good to know that--

In the eternal present, the manger Child lives.

In chronos, Three-in-One opened child's eyes, looked into ours with utter clarity, and did not turn away.

In that lightning-rich rending of muck and death, that blink in time and wash of eternity,

Incarnation and Redemption united in a Baby.

This is how the world is won.

This is how the war is won.

Sometimes, it is good to know that. 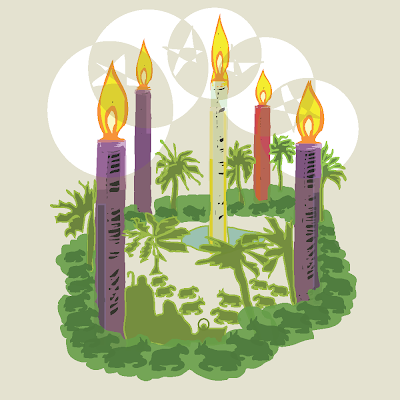 Posted by jemmagirl at 3:23 PM 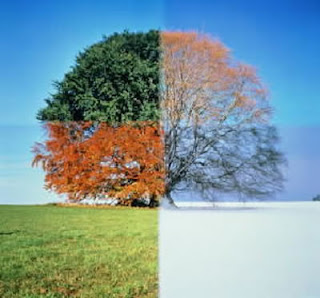